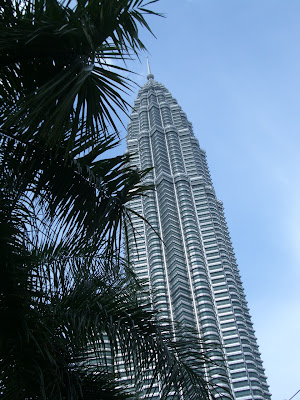 Camera is fixed!! Almost a serious panic situation when we arrived at Casio on Middle Road to find it was closed until after Hari Raya for their stock take. (We leave for India on Wednesday, Hari Raya day, therefore missing Casio altogether) Tim begged me to call to check if they were open this morning, …I hate hearing ‘I told you so’. And not to mention today was the hottest day since we’ve been in Singapore + it took 2 buses to get there, which normally wouldn’t be so bad, but the city is a little F1 crazed still…more on that later. But Sim Lim Square saved the day, fixed it for free. Phew. 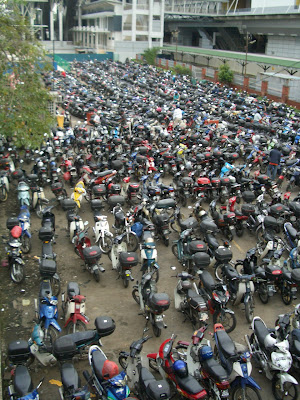 Anyway, rewind to 3 weeks ago! We took the bus across to Johor Bahru to buy our train tickets in Malaysia to get up to KL. Scope these bikes across the causeway, I think this is 1% of the motorcycles they have in JB. 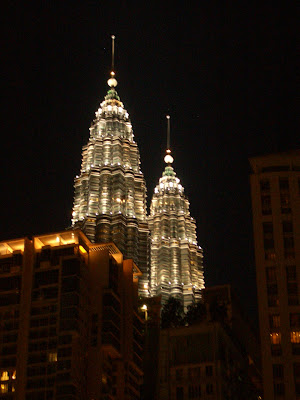 Boy has KL gotten nicer! We only spent one night there, catching up with Tim’s cousin Matt. The Petronas Towers were so beautiful all lit up at night, and we had dinner there. The mall inside is something else…you would have thought you were in New York City or London. Every shop you can imagine…Tim and Matt were dragging me out of Top Shop…If there would have been Top Shops all throughout Malaysia, I might have lasted there longer than 2 weeks. 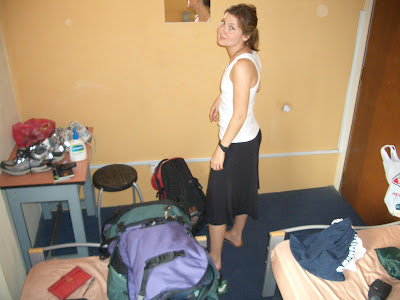 The next day we caught the bus bright and early to Tana Rata in the Cameron Highlands. I’m so not a morning person, especially without coffee. Tim thought it was really funny take my picutre during the favorite part of my day, which is made even better when you have to pack! This picture also highlights the level of accomodation we seek on this adventure!