The privacy fence doubles as a climbing wall, the garage is a play space for billiards, board games and movies, and the grassy backyard allows for some very intense soccer games at the West University Place home of Drs. Stephanie Freeman and Brian Tison.

Their painted brick facade and familiar roofline fit the architecture of this tree-lined neighborhood, but it’s the fun-filled amenities that define the purpose of this home for a family with three very active young children.

Freeman, 39, and Tison, 38, are both pediatricians — she is an outpatient pediatrician at Texas Children’s Hospital, and he works as an allergist at Vital Allergy and Asthma. They want their children to be active and engaged in organic play.

So when they decided to tear down their aging, 1940s-era home and replace it with a new one, they knew they needed help making it fit both the lot and their family’s needs. Tison, a Rice graduate who went to Baylor Medical School and did an allergy-immunology fellowship at Texas Children’s, fell in love with West U when he was in college. He and Freeman, a Dallas-area native, met during their residencies in Cincinnati, and when they moved to Houston in 2009, it was the only neighborhood he wanted to look for homes in. 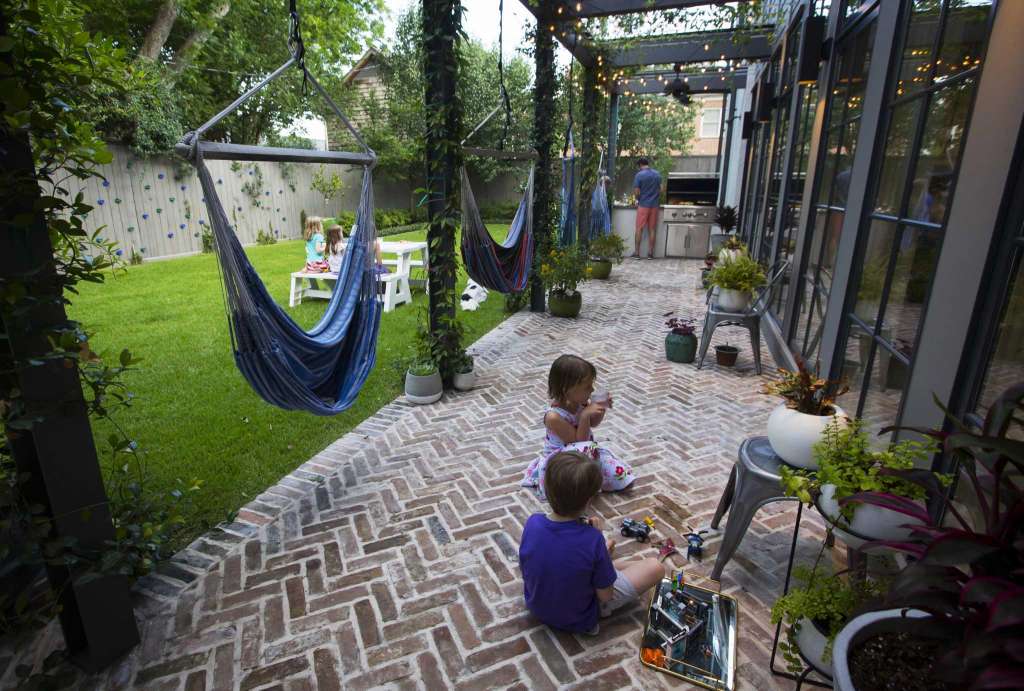 The house originally on this site was built in 1940 and was remodeled in 2008, but it had issues. Tison laughs about the vines growing through fireplace bricks, fungus growing on doorway woodwork and the brazen mouse who acted as if it owned the place. But perhaps the biggest issue was the way the 1,900-square-foot, one-story home was situated on the lot, leaving little room for a yard.

Their architect, Kelly Cusimano, created an L-shaped plan for a new, two-story home with a standard front lawn sized for the neighborhood, but a big, grassy backyard for more serious playtime. The home’s exterior style fits perfectly in this neighborhood of traditional homes, but it comes with more modern updates: a metal roof, steel trellis and industrial vibe.

“It’s modern, but it’s not a cube. It’s unfussy in the materials and lines,” said Tison, who first fell in love with Cusimano’s work on an AIA Houston home tour. Tison and Freeman consulted with a few other architects on remodeling designs that just didn’t click. Finally, they called Cusimano, and he urged them to start over from scratch.

The home has big open spaces and a couple of flex rooms on the first floor, with bedrooms and a laundry room on the second floor. Tall windows and a patio that runs along the main-floor space help create an indoor-outdoor feel.

Then there’s the garage that’s not really a garage. Sure, Tison and Freeman could park cars there — they just don’t want to.

“I wanted a place where we had a grass play space and then a covered, shaded play space and then a hardscape to play on. A series of spaces in order to do different kinds of things,” Tison said of space devoted to 7-year-old Eleanor, 6-year-old Henry and 4-year-old Vera. “We wanted an extension to the neighborhood where we open this (front garage door) on Fridays and the neighborhood kids come over to play and the adults come to hang out. It’s almost like a sign. Open the garage door, we’re open — and we always have a soccer ball out, just in case.” 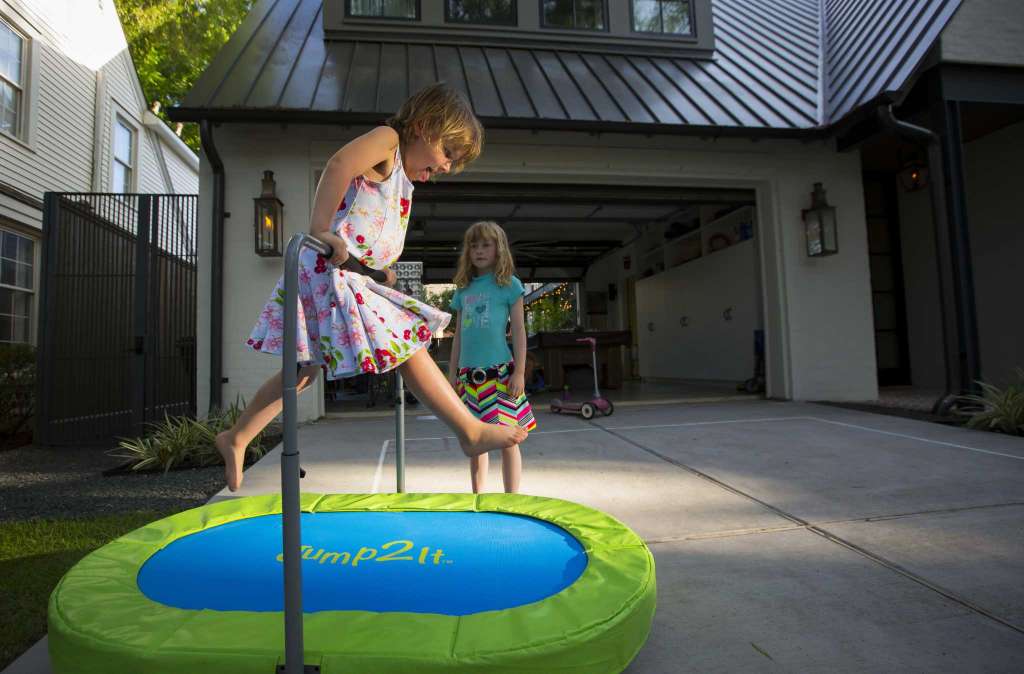 Behind the traditional front garage door is a heated/air conditioned space with cabinets that hold games and toys, a pool table and a projector so the children can watch movies there sometimes. At the back of the garage is another big door that pulls up, except that it’s all glass panels so that adults on the patio or in the backyard can see through to keep tabs on the kids.

“Brian was always going through Swamplot and looking at any of the new buildings going up in and around West U and Southside Place. He saw Kelly’s work on a home tour and on Houzz, and we had gone through all these architects. In frustration I said ‘if you like this guy, contact him. We need to get moving on it. We need to do more than talk about it,’” Freeman said.

“Kelly really improved our level of taste. He has three young children and knew exactly what we wanted. Instead of looking at us like we’re crazy to use a garage as a play room he said ‘I get it,’” she added. “I wanted comfortable living, something relaxed, where the kids feel free to put their feet on the furniture and roller skate in the house.”

Freeman’s mother was a librarian and her father was a college professor, and they kept their home neat and quiet. Rooms with breakable things were off-limits to children. For her own children, she wanted the opposite.

So if the kids want to dig in the dirt and drag pretty rocks inside and mud gets tracked in along the way, the home’s concrete floors can take it and so can Freeman and Tison.

Some of Freeman’s interest in her kids’ activities come in wanting them to play more freely than she did as a child, but much of it stems from the couple’s child-centric medical training.

Through play and games, the Tison-Freeman children learn to win and lose with humility and grace. Backgammon and card games are about strategy and math. “I think competencies for kids come in mastering play, and resilience in adolescents and adults comes from falling flat and getting up and doing it again,” she said. “They’re our kids, so they’re not going to be athletes. Losing gracefully is a good skill for them.”

Tison and Freeman demonstrate it in their own lives, too. Recently they learned to ride an electric unicycle. “It was the most fun I had with Brian since we dated, learning to ride that unicycle. It really was fun,” she said. “We got a ping pong table the other day, and Brian’s really excited about that. He’s just a big kid. That’s how I knew I would marry him. He was saber-dueling with a 7-year-old. We were in medical school, and I thought ‘that’s the guy for me.’ He’s unafraid of being a giant dork.” 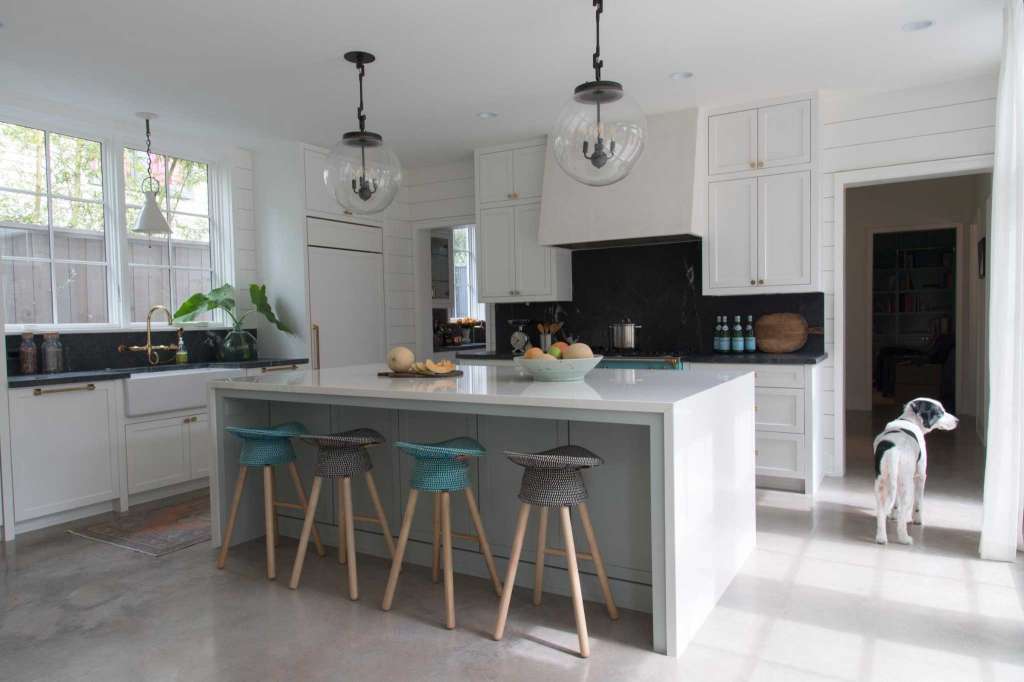 All of this fun has meant that other families congregate at the Tison-Freeman home. Kids play in the driveway or garage; impromptu soccer matches can get heated, even for a bunch of 4-year-olds. And their parents hang out in hammocks or chairs on the patio as Tison fires up their outdoor grill.

And indoors, the home is just as energetic, with bold colors in every room. 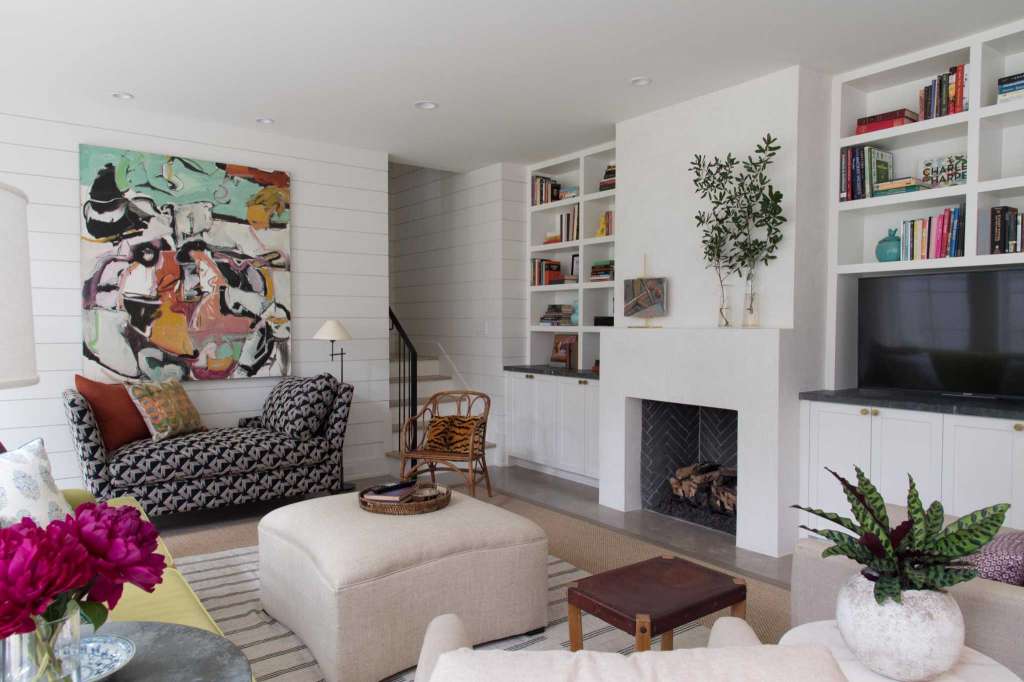 If the couple found Cusimano because of Tison’s affection for home tours and architecture, it was Freeman’s love of home design that connected her to Meg Lonergan of Meg Lonergan Interiors. Freeman saw a story about Lonergan’s own lively home in a 2012 issue of Better Homes and Gardens magazine. (The designer’s current home was featured in the April 2018 issue of Southern Living.)

She saved it, thinking someday she’d have a dream home to decorate and when the time came, Freeman called Lonergan about the project before they had a builder or an architect. 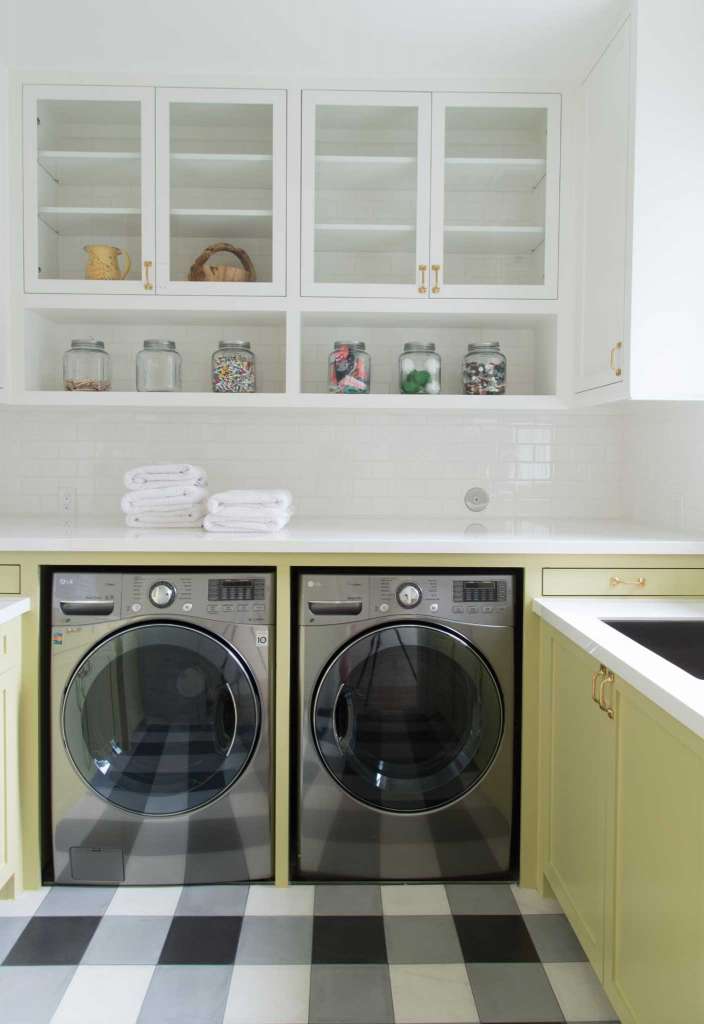 “I liked her style but wanted to pump it up with lots more color. I think she saved me from having a circus tent on my hands,” Freeman said of their give-and-take.

Lonergan took the role of coach, letting Freeman lead with her favorite colors — aqua, chartreuse and fuschia — and then finding ways to soften it with other items, such as neutral seagrass rugs or plain chairs. It also meant that certain colors needed to be repeated in small doses throughout the home. 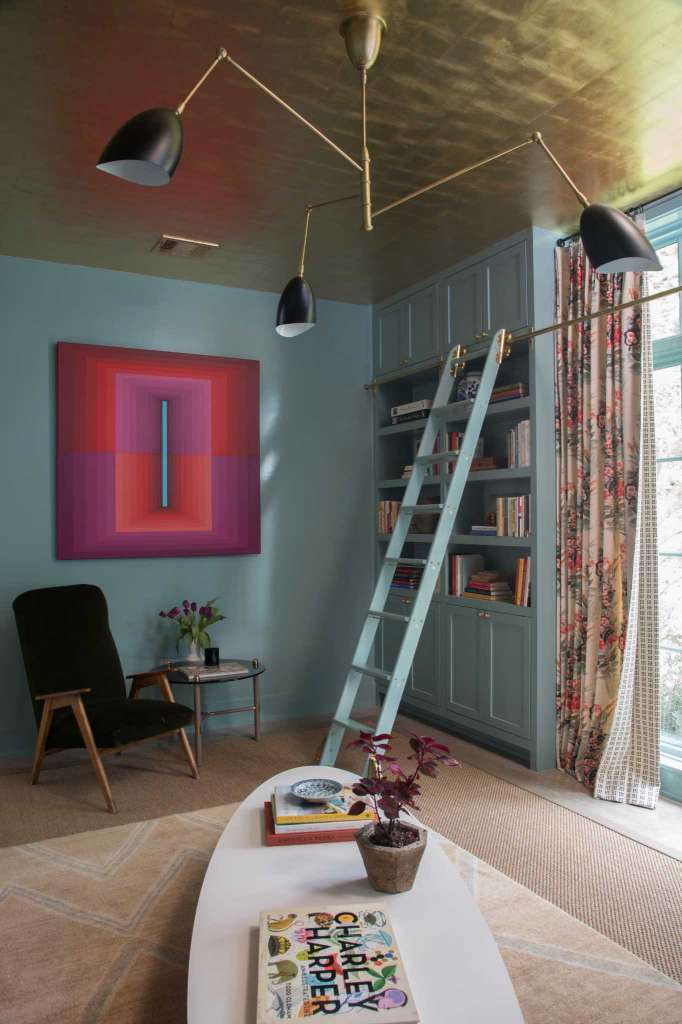 “It’s ironic. Normally, I’m the one pushing people into color,” Lonergan said. “I didn’t want her to be sick of it so it needed to be timeless and iconic without looking too trendy. I wanted her kids to be able to say ‘I remember the apple green sofa my parents had …,’ but if you do every single thing like that, nothing becomes special. It was about choosing which things to highlight.”

In the home you’ll find a turquoise La Canche range, and an indoor play room’s walls are that color, too. The living room sofa is chartreuse, a color that repeats in the mud room door and laundry room. Aqua, chartreuse and fuschia all make an appearance in the master bedroom.

“They were so excited to take risks. Everyone else is definitely more shy when it comes to color, especially with upholstery choices,” Lonergan said. “They were so brave and bold and happy.” 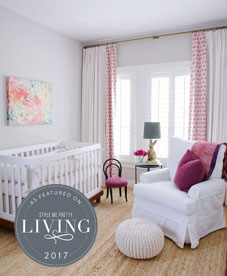 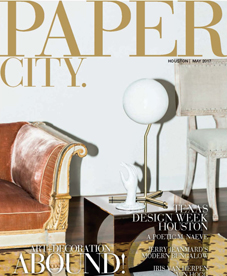 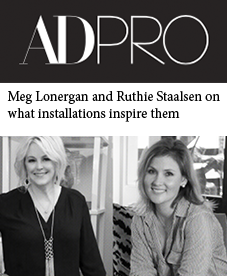