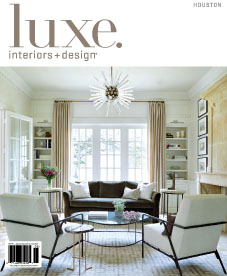 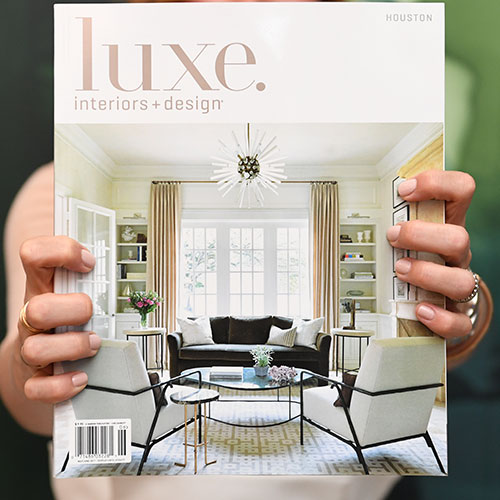 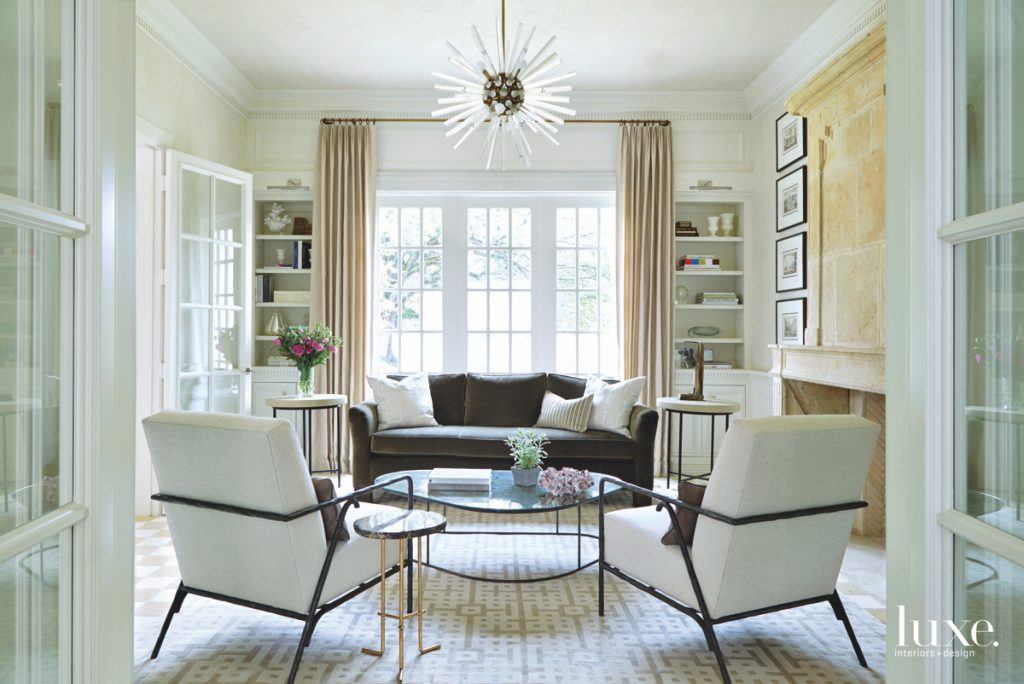 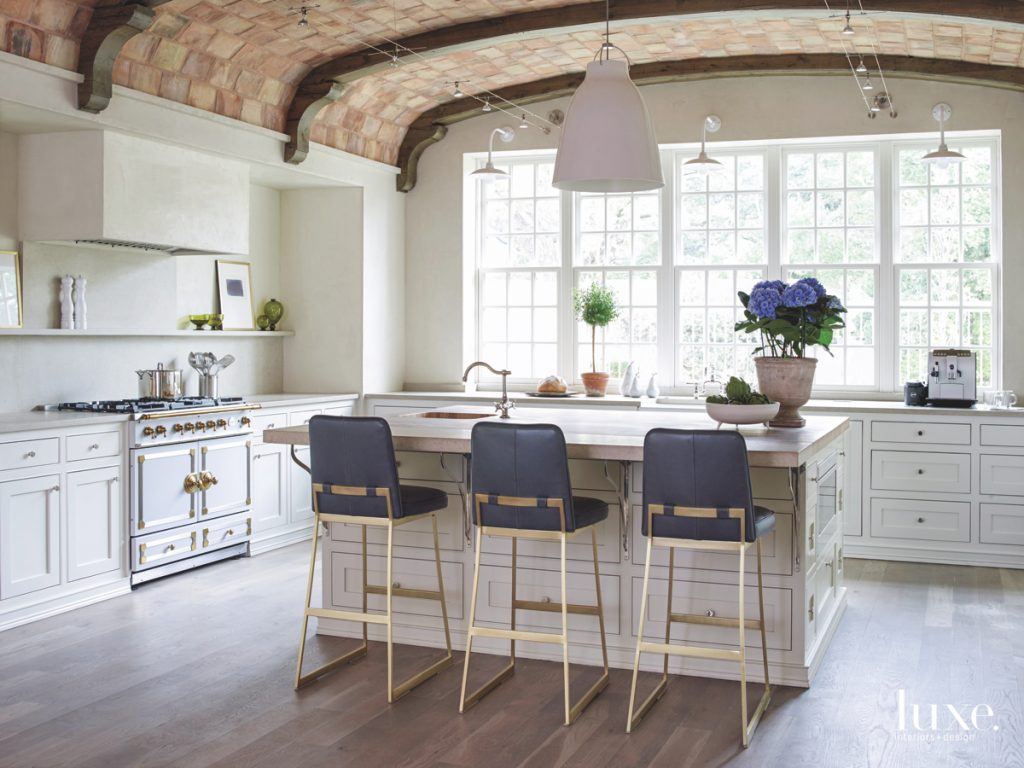 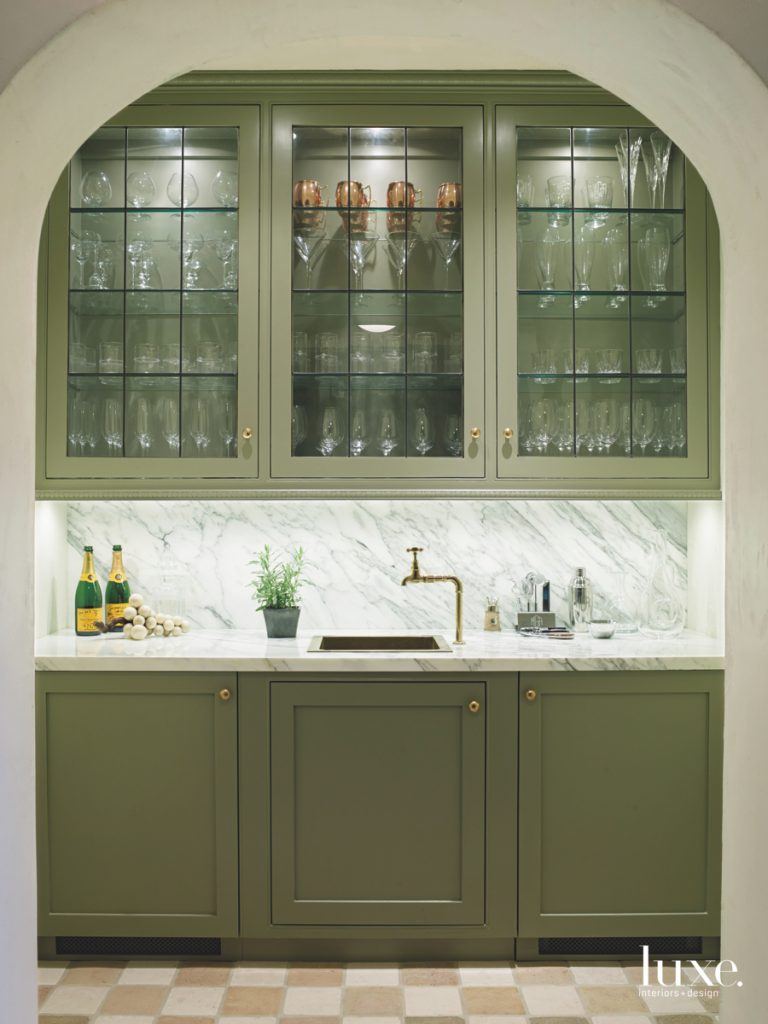 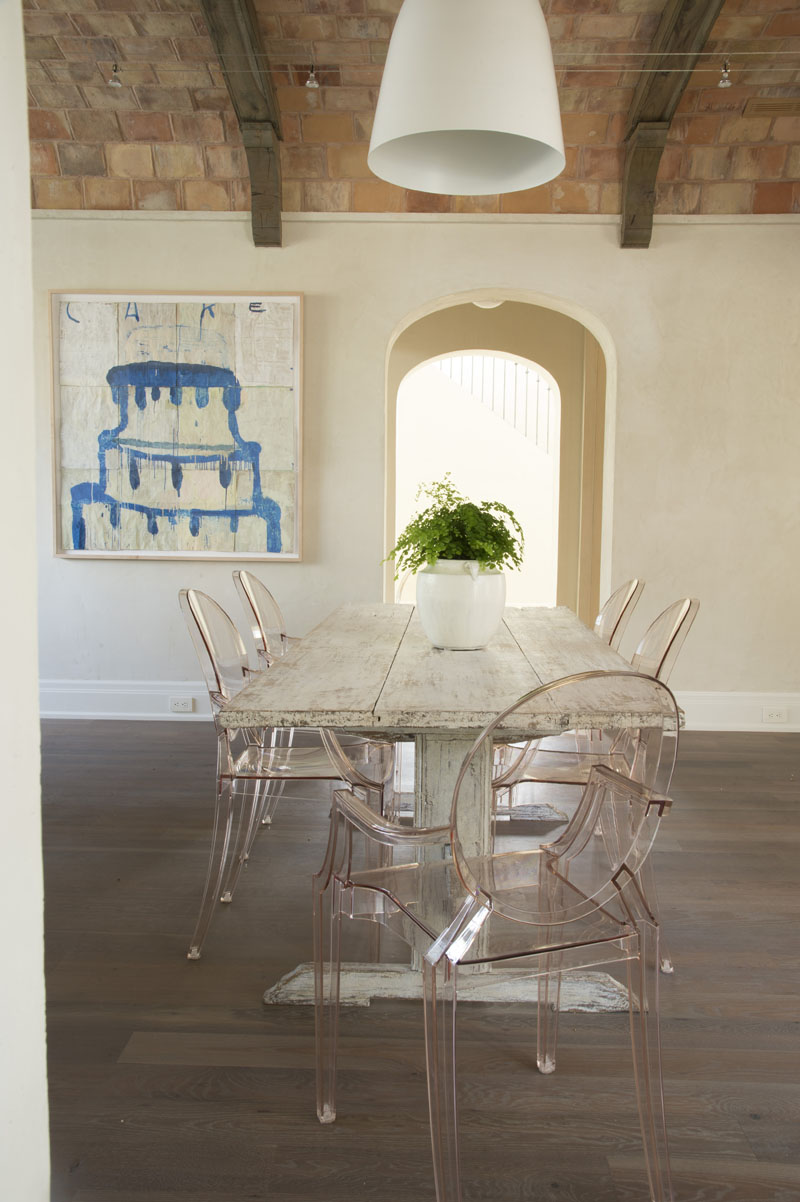 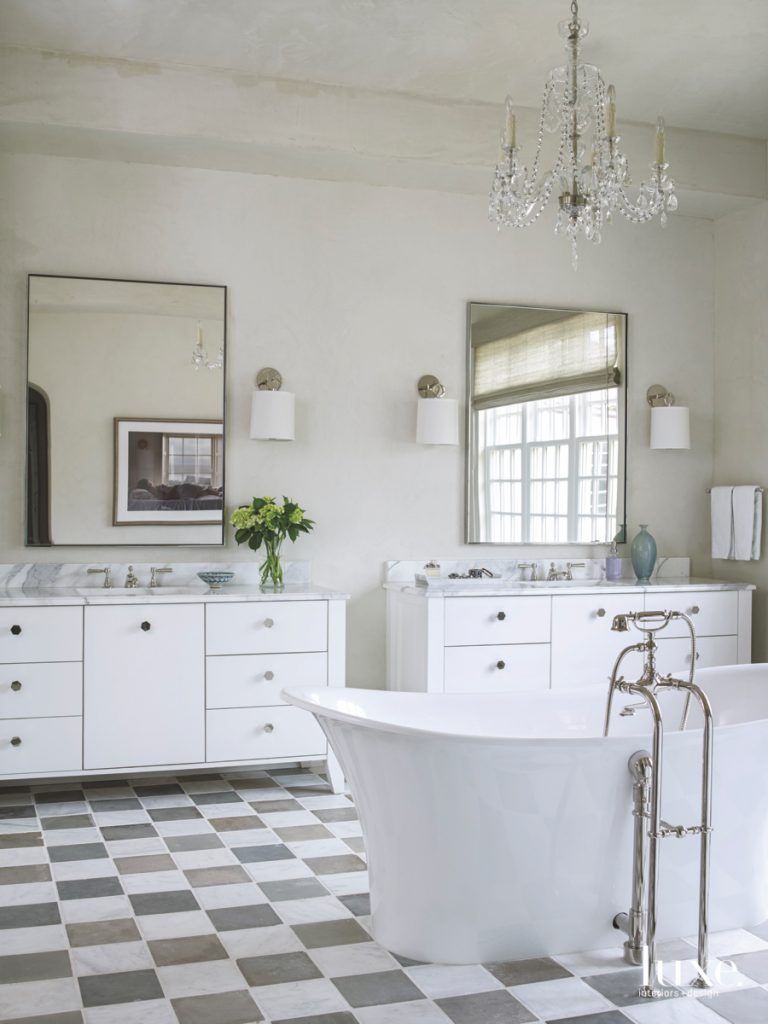 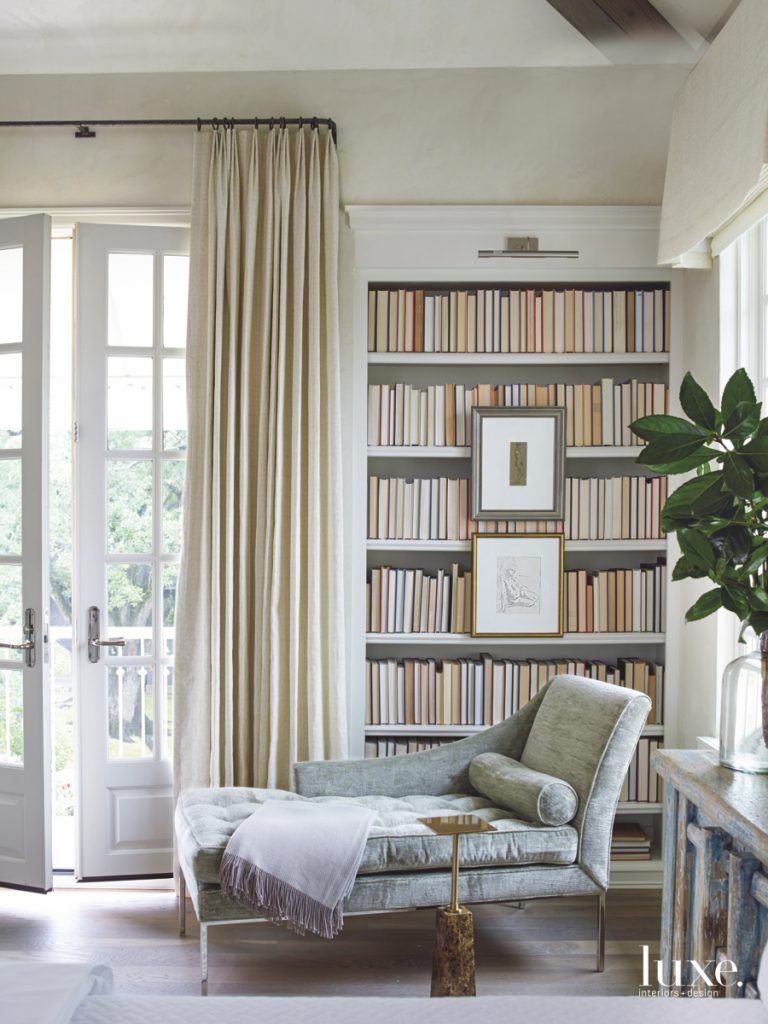 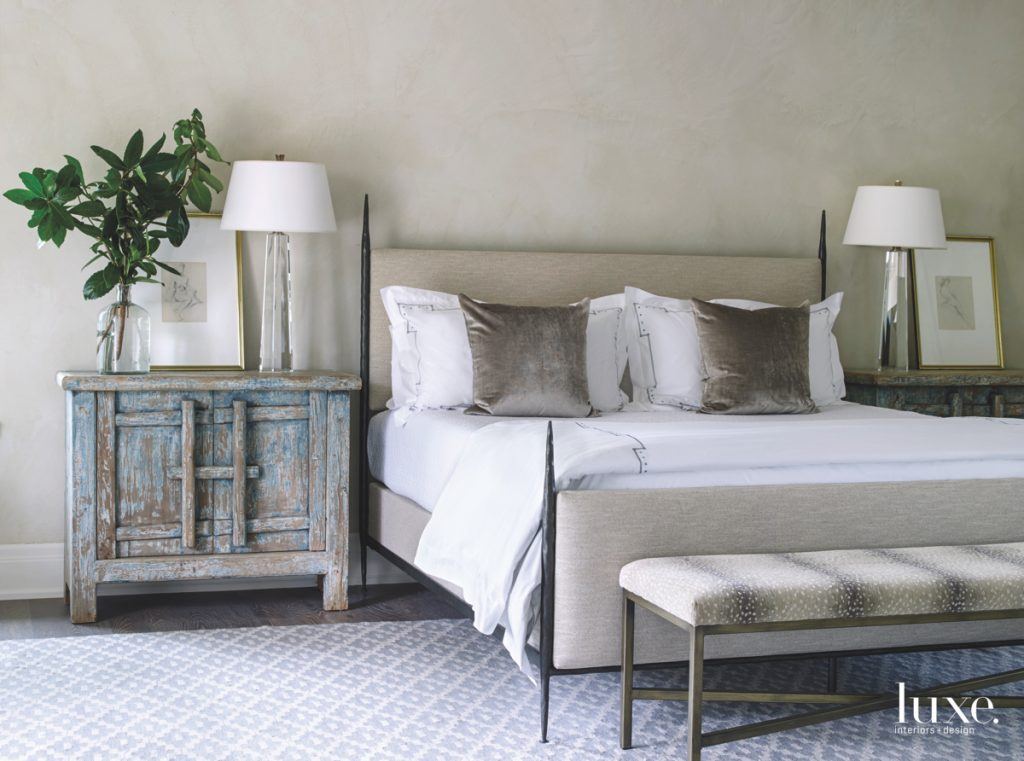 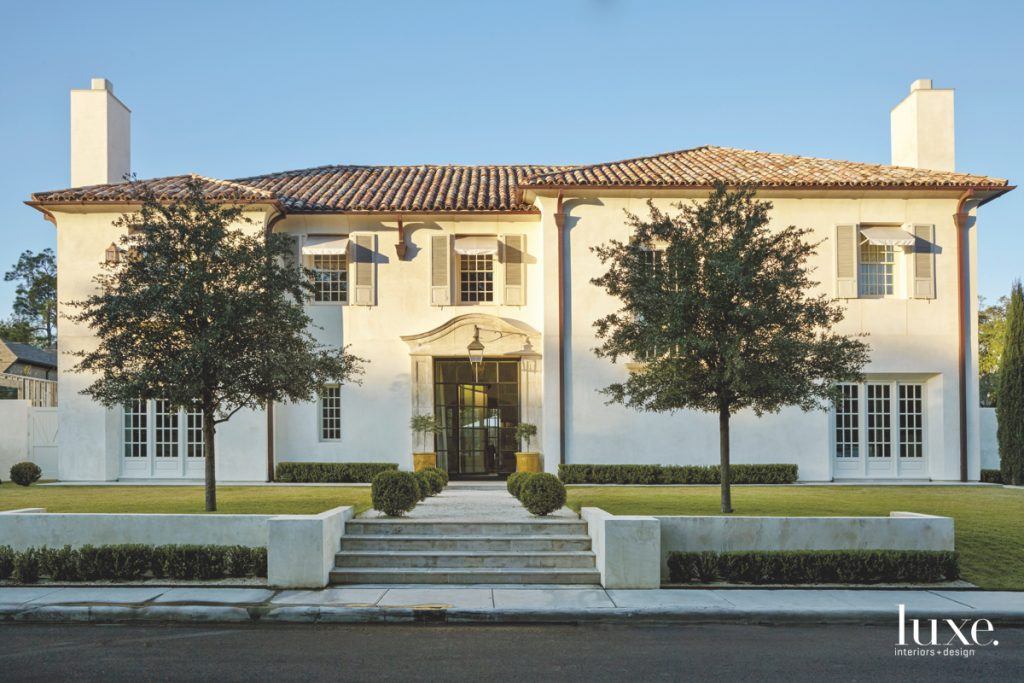 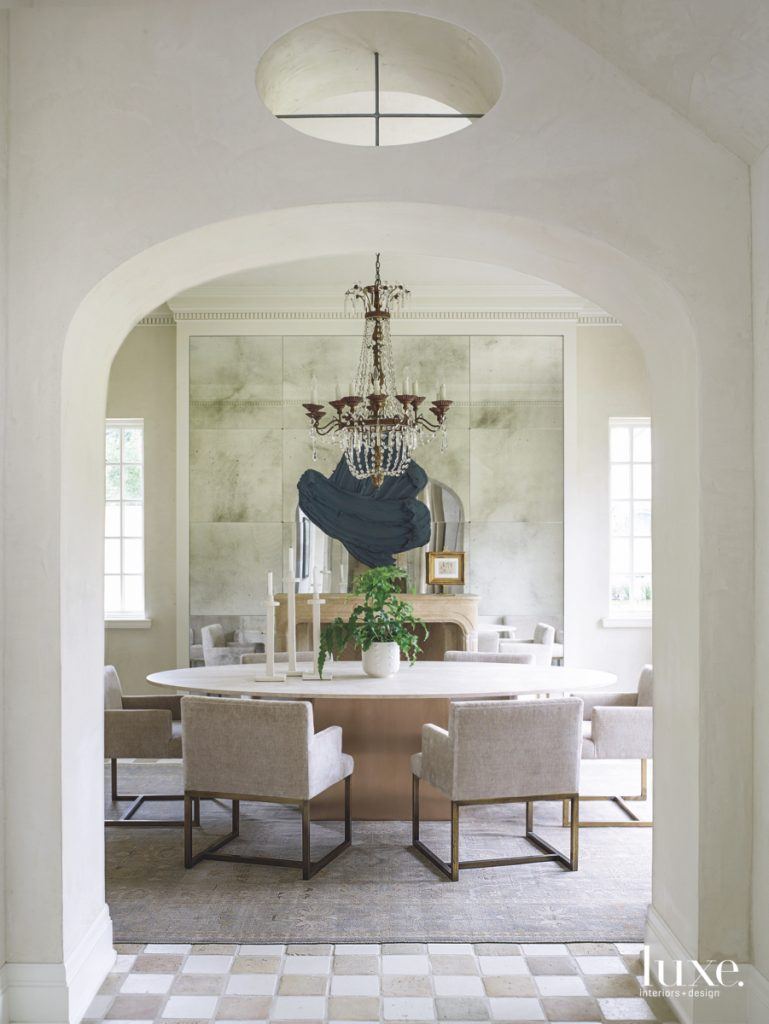 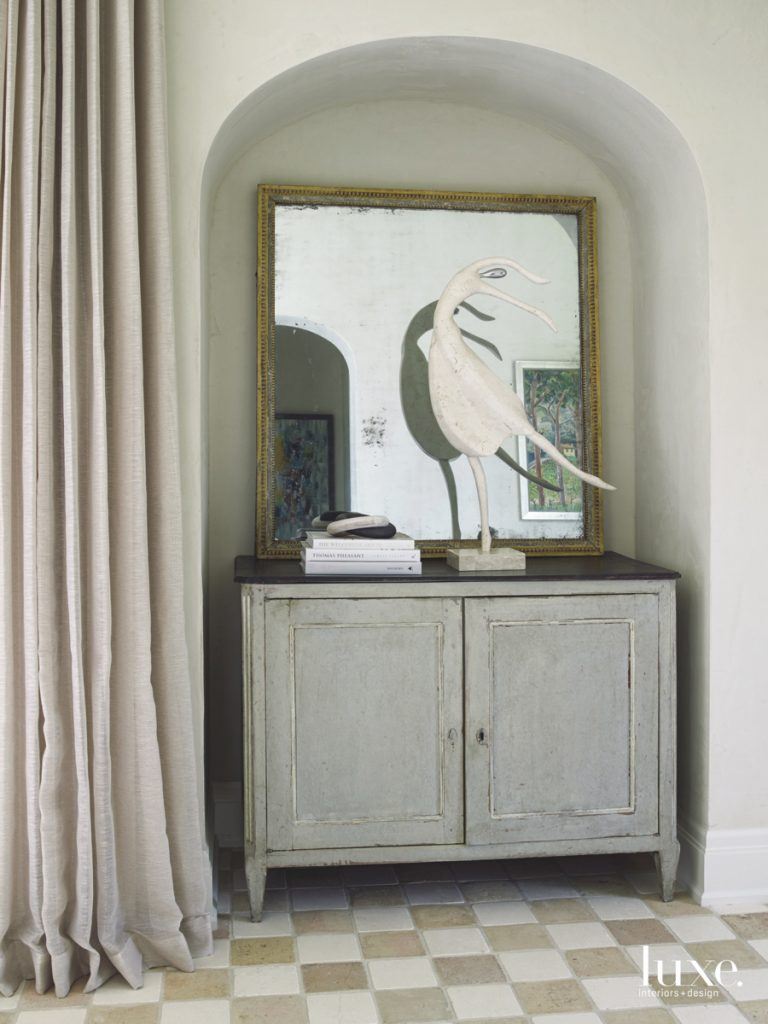 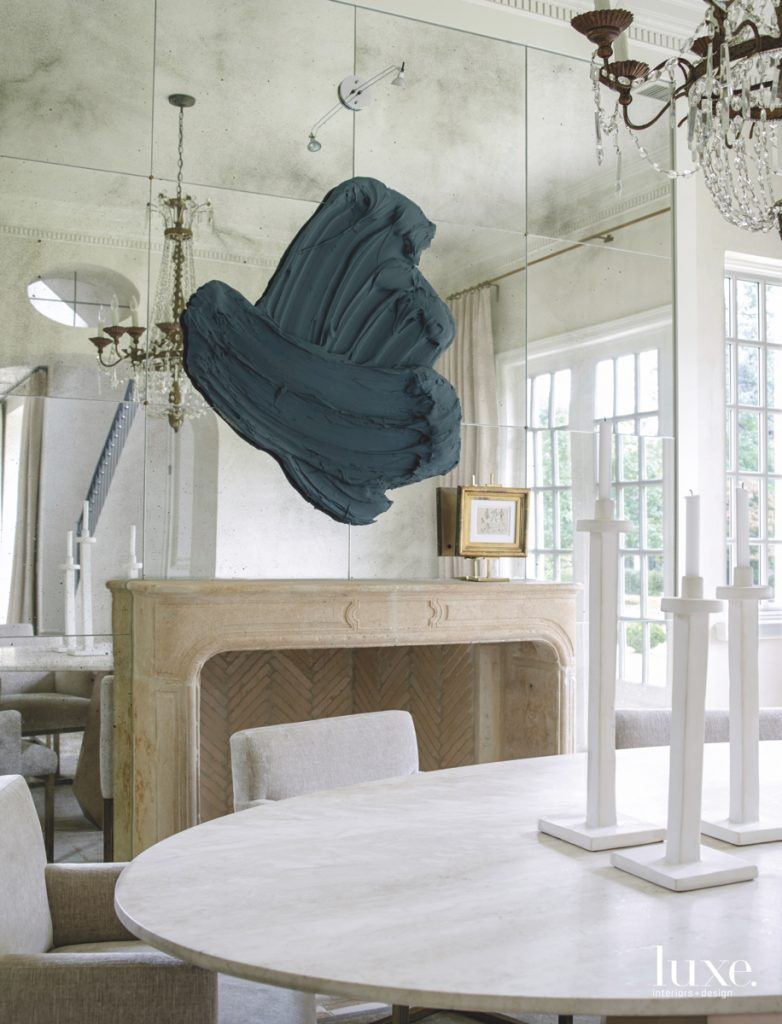 Once upon a time, in a rural bastide in the South of France, there was a farmhouse kitchen with a melange of terra-cotta and rose-colored ceiling tiles that infused the space with a warm, cozy glow. One hundred years later, those same tiles traveled 6,000 miles to be reincarnated in the ceiling of yet another kitchen, this time in a new Provencal-style Houston residence. According to designer Meg Lonergan, it was details such as these tiles–coupled with integrated color stucco walls, a door surround carved from 18th-century French limestone and the symmetry of perfectly shaped boxwoods lining a gravel walkway–that had everyone talking about the spec house on the corner. “It was all the buzz around town,” she recalls. “It was not your usual spec home, and everyone was wondering whom it was for.”

Curiosity continued to mount as builder Marvin Morris and partner Steve Hullinger–who handled the home’s architectural design and construction–forged ahead without posting a For Sale sign. “We wanted to create the classic, romantic, collected feel of Provence and see it through without anyone questioning what we were doing,” Morris says. “We also wanted there to be a sense of timelessness and a mixture of old and new that implied the house evolved over centuries.” Making that happen mandated several trips to the French countryside, where Morris handpicked every stone and filled three 40-foot containers with items sourced specifically for this project. “The star of the house is the roof,” he says, referring to the blend of reclaimed 18th-century tiles purchased from a vendor near Avignon. “The mix of pinks, yellows and oranges sets the tone.”

The meticulous attention to detail continues inside with hand-troweled mottled plaster walls. “They are a truly living, breathing entity,” says Morris, who also designed a traditional checkerboard entry-floor-with-a-twist by mixing 18th-century tile from Lyon with pristine white Austin limestone to reinforce the idea of layering over time. Similarly, the home’s wine room is clad with ancient limestone on the walls and enclosed with 21st-century glass doors.

As all this work was being done, phone calls inquiring about viewing the project were pouring in–including a few from a young couple with one child, who have since welcomed a second. “We finally convinced Marvin and Steve to let us sneak in and see it,” the wife says. Once they were inside, the sight of reshaped 18th-century oak ceiling beams and antique fireplace surrounds only enhanced the couple’s longing, and their initial meeting with the builders proved providential. “For some reason they liked us, and we bought the house right away,” the wife laughs.

Serendipitously for Lonergan, the new owners were previous clients who immediately tapped her to outfit the interiors. “Meg was the natural choice,” the wife says. “She already knew our taste, and she and my husband even went to high school together in Singapore.” All agreed they should follow the established contemporary-meets-old-world theme.

Calling on her signature ability to mingle different genres, Lonergan juxtaposed the living room’s vintage sofa upholstered in velvet from the couple’s previous home with the modern lines of iron-framed armchairs. In lieu of color, she layered textures through shagreen-wrapped side tables, waxed-linen draperies and a soft wool-and-silk Tibetan rug. “The homeowners wanted to marry their different aesthetics, and the variety of materials was one way to balance the masculine and feminine,” the designer says.

In response to the wife’s desire to keep the interiors neutral-colored and kid-friendly, the predominantly white family room features washable-linen-slipcovered sofas and a massive concrete coffee table, both meant to prevent things from seeming too precious. “This is a relaxed space where you can put up your feet,” Lonergan says. Elsewhere in the home, the designer answered the husband’s request for Oriental accents, inspired by his years living in Singapore, through deep blue leather on the kitchen-counter stools and antique Chinese nightstands in the master bedroom.

The yin and yang continue in the dining room, where Lonergan stepped beyond Houston’s borders to procure the expansive oval travertine table with a cast-bronze base by New York’s Egg Collective and surrounded it with chairs unearthed from a 1950s London hotel. “I’m driven to find things that aren’t typical to the area and that haven’t been used before,” she explains.

When it came to artwork, Lonergan delivered with modern pieces offering an invigorating contrast to the old-world backdrop. In the family room, for example, a painting by artist Gregory Hayes is a colorful counterpoint for the stone fireplace, and in the dining room a sculptural painting by Donald Martiny–whose work also hangs at One World Trade Center in New York–is a breathtaking foil for the wall of antiqued mirror glass. “Meg was able to find things to suit my personality that I never would have discovered on my own,” the wife says, continuing with high praise for the entire team. “If I were building a home myself, this is exactly what I would have done. It’s absolutely perfect.”